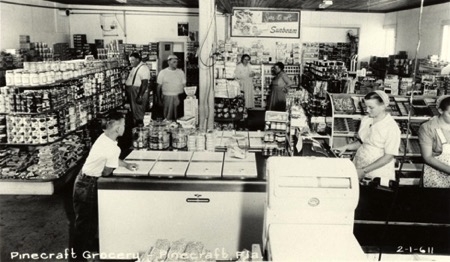 Newcomers to Sarasota are often surprised to find substantial Amish and Mennonite communities in town. The historical core of this community is south of Bahia Vista Street and west of Phillippi Creek. An explanation for the small lots in the original section lies in the earliest subdivision recorded for that parcel, the Sarasota National Tourist Camp.

Laid out in early 1925, the camp included 454 lots that each measured 40 by 40 feet. The following year Earl S. and Mary K. Craft platted Pinecraft. They added lots east and west of Phillippi Creek, to cover the area now between Lockwood Ridge Road and Kaufman Avenue. They reserved land along the creek for a park and noted the location for a community house and water tank. The lots that had been drawn for the Tourist Camp remained the same size; those west of the creek were larger.

In 1926, First National Company of Sarasota laid out the neighboring subdivision of Homecroft. It covered the land between the Tourist Camp and Beneva Road, from (now) Hacienda to Schrock Street. The Pinecraft name is used informally for the general area in which these subdivisions are located.

The earliest Amish and Mennonite visitors to this area were attracted not only by the weather, a welcome change from winters in Ohio and Pennsylvania, but also by the opportunities offered for winter farming. The first families of record, according to a history by Mrs. Myron Yoder, grew vegetables on land in the Palmer Farms, which were in Fruitville. A few families purchased land and became permanent residents; many farmed during the summer in the north and in Sarasota during the winter.

Not until 1945 was there a year-round permanent church within this religious community. By the early 1930s, the winter population had grown too large for worshiping in members homes. Amish and Mennonites together used the Tatum Ridge School until 1936 when a storm blew it off its foundation. The old Fruitville School became the next location for Sunday school and worship until the 1944 hurricane damaged it. A group of Mennonite residents organized a permanent church in 1945 and were given five lots along Bay Shore Road. Volunteers from the community and from the Civilian Public Service Camp (an alternative to military service for pacifists) in Mulberry provided most of the labor to build the first Bay Shore Mennonite Church structure.

In Pinecraft itself, religious services were held at times outdoors, for a couple of years in a former Presbyterian chapel, and finally in a former bakery on the south side of Bahia Vista. This congregation is often called the Tourist Church. Another congregation formed the Tuttle Avenue Mennonite Church in the 1950s.

A small business district gradually emerged on Bahia Vista. The Pinecraft Elementary School met in former Sarasota Army Air Base barracks that had been moved to land just east of Beneva Avenue. The Pinecraft Eat’N House, Pinecraft Hardware, Pinecraft IGA Grocery (pictured), and the Pinecraft branch of the U.S. Post Office were operated by and served the seasonal and year-round residents of the area. While Amish and Mennonite restaurants and churches have spread into the county, Pinecraft is still considered the heart of this special community.

Special thanks to Ann Shank, former Sarasota County Historian, for her research and time devoted to writing this article. Brought to you by Sarasota History Alive! “Where History Happens Everyday.”